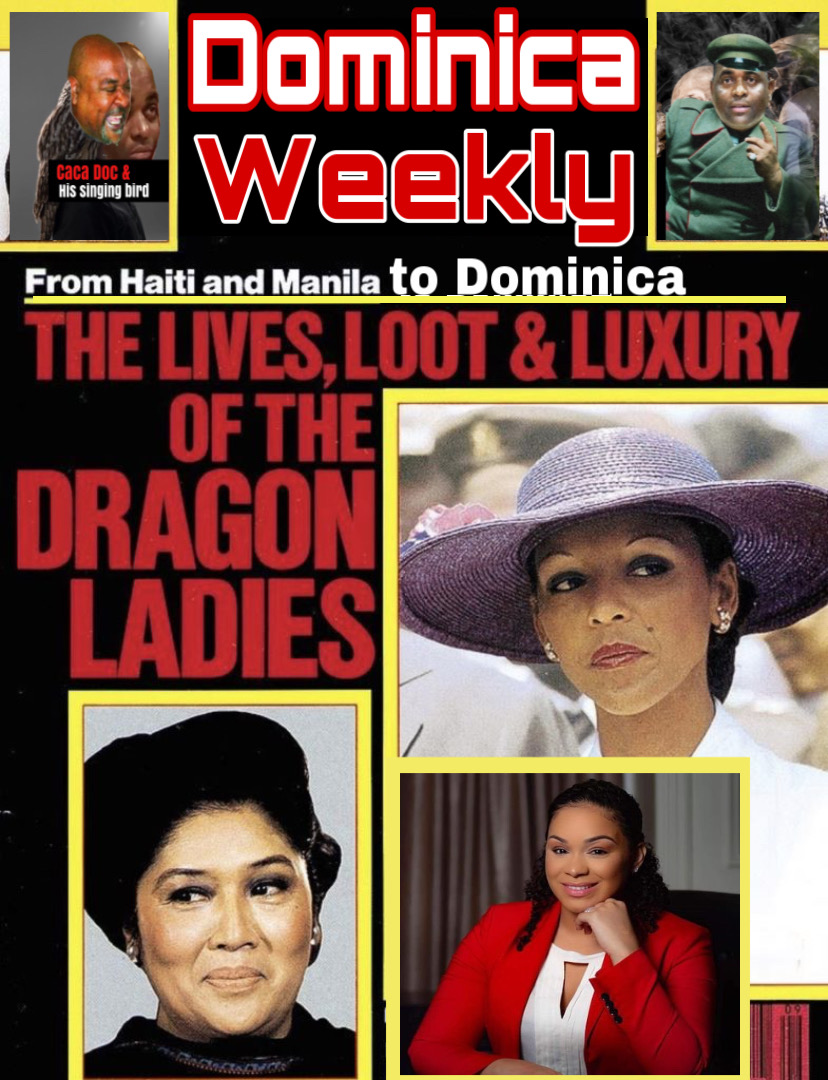 In the Dominica church of old, before some priests became prostitutes to the party in power, there was a Social League. The Social League taught catechism, helped the poor and produced annual parish fairs and tea parties to raise funds. Today, the Social League has dwindled – replaced by the League of Lady Looters. Lady Looter in Chief is Melissa Mama Doc Skerrit. She walks in the high heeled path of Michele Duvalier – the looting wife of Haitian dictator Baby Doc.

Before she and her dictator husband were overthrown by enraged Haitians 1986, Michele Mama Baby Doc Duvalier and her husband looted that country. Ma Baby Doc was infamous for buying a refrigerated container to house her 100 animal fur coats so they would not stink in the humidity of a tropical island. All the while she heartlessly looted that nation’s treasury. She dined on imported caviar and Maine lobster as the majority of Haitians wallowed in poverty. Even after she fled to France with her husband Michele was found by French police to have bought $500,000 in jewelry and dresses since her exile. Does this sound familiar?

We have a Mama Doc in Dominica.

Melissa Mama Doctor Doctor aka Mama Doc of DA is in the same school of disrepute as Michele Duvalier. Gaudily decked out in designer wear she dishes out junk foods such as hot dogs to children via a charity funded with money of dubious origin. They gorge themselves on the fat of the land while poverty increases.

Mama Doc lives in a multi-million palace rented for her and her double Phd Crime Minister husband Skerrit – who never studied for a minute for any of his pappyshow doctorate degrees. The vanity of the Mama Doc and Doctor Doctor PM knows no bounds. Concerned that the storm of national outrage is gathering they now have imprisoned themselves behind a Berlin Wall replete with machine gun wielding guards.

Like Madame Marcos of the Philippines who had 5000 shoes, Mama Doc is said by insiders to be not too far behind. Distressed by her skirt chasing Doctor Doctor husband, Mama Doc buried her sorrows with lavish bouts of shopping. She wallows in the glitzy gowns purchased by the loot that she “gravitated” from the gravy train that Dominica’s treasury has become for the notorious first couple.

While unemployment hovers at 50% for youngsters and homes remain uncovered 4 years after Hurricane Maria, the Mama Doc of Dominica is led by the mischievous spirit of Michele Duvalier.

Sadly those who do not remember history are doomed to repeat it. Mama Doc fails to understand that you cannot buy virtue with a handbag by Versace. Yet Mama Doc Melissa tries.

Lady Looters have congregated around the double doctor. Where they did not receive cool-out money to run for office, they follow the shameless “shake the pampalam” philosophy uttered by Minister of Education Minister Alfred.

Mama Doc Melissa and her husband have sought to purchase respectability and failed. They are haunted by the ghosts of the doomed Duvalier regime and seem incapable of escaping that fate.

Maybe they can wise up and peaceably resign, thus sparing our beloved land any more suffering under the League of Lady Looters now congregated around the Doctor Doctor PM and his Mama Doc wife who resembles Michele Duvalier.