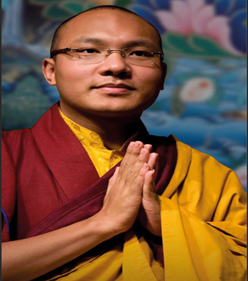 Dominica’s CBI program is popular and well known around the world. Unfortunately, under the DLP Administration, the program has a bad reputation for attracting notorious, nefarious, unsavory characters, and international crooks and criminals on the run from the law. For the most part, however, the program attracts decent people, who simply require second citizenship with a bonafide passport to facilitate visa-free travel and to enable the conduct of personal and professional business. Unashamedly, the DLP  administration has allowed the program to be tainted in the way that it is managed. The DLP administration misuses and abuses the proceeds generated from the program and continues to place the proceeds from the sale of our citizenship in escrow accounts with companies like MMCE,  hidden away from the consolidated fund and the eyes of the Director of Audit and the parliament of Dominica. Occasionally, the CBI program attracts very clean, noble, and holy men.

In November 2018, the Investment Migration Insider reported that the likely successor to the Dalai Lama had acquired Dominican Citizenship through an investment in the Jungle Bay Resort and Spa managed by Sam Raphael.[1]  Jungle Bay is described as a unique CBI investment project that offers security through individually titled holdings along with a development and management team with a successful CBI track record. “This property is said to be ideal for the investor that is interested in a good return on investment and resale value,” according to Sam Raphael, the developer of Jungle Bay. At the time, Jungle Bay reported that 95 of its 120 units were sold under CBI. 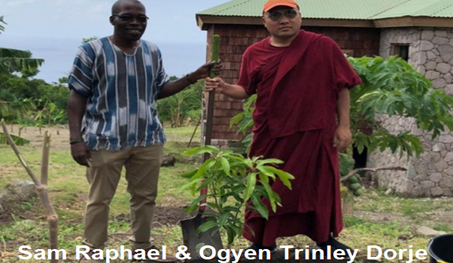 His Holiness Ogyen Trinley Dorje, one of the two claimants to the title Karmapa Lama and tipped by the leading Buddhists to be among the most likely candidate to be the next Dalai Lama has been caught in Dominica’s CBI net and is now a Dominican citizen – if only to facilitate his international travel. In a press release by the Jungle Bay developer, it was indicated that the process had been lengthy and fraught with obstacles but successful. The press release claims that this affords the Karmapa the freedom of travel globally to over 120 countries without restriction. The Karmapa actually received his citizenship during his visit to Dominica in 2019, when he met personally with the developer of Jungle Bay.

His Excellency, Ogyen Trinley Dorje was recognized as the 17th reincarnation of the Karmapa at the age of seven after a search party of Buddhist monks identified him in a nomadic village in the Tibet Autonomous Region.  In an effort to maintain control of people of Tibet, the government of China kept the young Karmapa isolated in a monastery until he reached the age of 14 when a few trusted advisors helped him to flee to India in a daring 10-day escape through the Himalayas, which was later made into an epic movie- “Never Give Up” 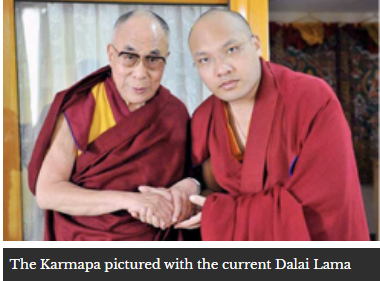 Upon arrival in India, the Karmapa was again subjected to isolation in a monastery and to extreme travel restriction as the Indian government desired to extend their influence in the Tibetan region and among the international Buddhist community. The Indian Government marginally relaxed the Karmapa’s ability to travel abroad with severe restriction.  The National Council of India then authorized the Karmapa to travel to Dominica, at which stage he decided to obtain Dominican citizenship so that he can travel abroad visa-free to promote his message of peace and living in harmony with nature.

Since the 12th century, the Karmapas have been the heads of the Karma Kaygü lineage and responsible for the continuation of this direct transmission lineage. The Karma Kagyu lineage belongs to one of the 4 main schools of Tibetan Buddhism. As a lineage of direct oral transmission, it places particular emphasis on meditation and the realization of the direct experience of mind gained through the guidance of a teacher.

The Karma Kagyu lineage has its roots in the teachings of the historical Buddha and developed into a practical way to enlightenment in India and Tibet. For over 1000 years Buddhist Masters such as Naropa and Maitripa in India as well as the famous Tibetan Yogis Marpa and Milarepa shaped the lineage as a practical everyday practice for laypeople.

According to the former advisor to the Centre on Tibetan Affairs, Amitabh Mathur, “obtaining a foreign travel document was an irrelevant issue…acquiring Dominican citizenship does not make the Karmapa less of a Tibetan. It is only for ease of travel and doesn’t diminish his stature,” Mathur has added.

The government of India had asked the Karmapa to return to India when the news broke that he had acquired Dominican Citizenship. They argued that his followers want him to stay in the country. The Cabinet Committee on Security, headed by Prime Minister Narendra Modi, had also decided to reserve a piece of land to the Karmapa in Delhi to construct his monastery. The Karmapa indicated that he was considering it, with the steep cost being an issue. The Tibetan spiritual leader expressed reluctance to return to India as he desires unrestricted movement within the country as well as abroad-hence his Dominican citizenship.