A prophet has no honor in his own country 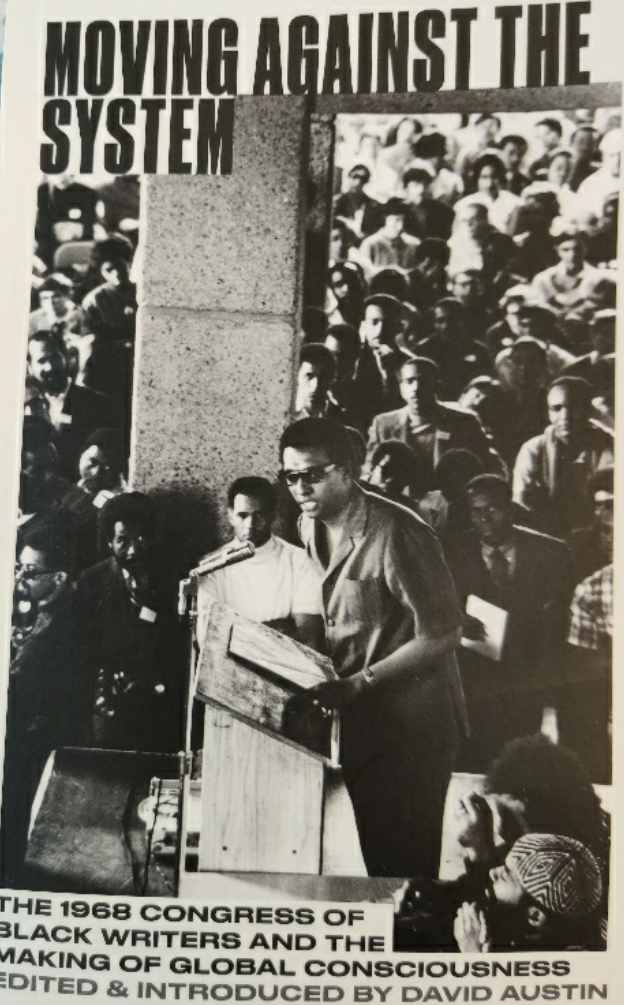 Moving Against the System – The book on the 1968 Congress of Black Writers at McGill University Montreal, Canada– Co-Chaired by Rosie Douglas of Dominica; it was the largest gathering of Black writers in the 20th Century (on cover is the legendary civil rights leader and Pan Africanist Stokely Carmichael-later known as Kwame Toure)

No nation can rise without a sound knowledge of its history and that of its greats. It is therefore incumbent on Dominicans, West Indians, and Africans in the Diaspora to be justly proud of the 1968 Congress of Black Writers. The event which took place   between October 11-14, 1968 was co-chaired by Dominica Grammar School 1959 graduate, our own Roosevelt “Rosie” Douglas who was then studying for his master’s degree in political science at Canada’s leading institution of higher learning, McGill University. The conference was organized primarily by the Caribbean Conference Committee of Canada and is considered the largest gathering of Black writers in the 20th century as well as largest Black Power conference ever held outside the United States. The co-chair of the Congress, with Douglas, was medical student, one Elder Thebaud of Haiti. Thebaud later became a psychiatrist and Douglas later  became Prime Minister of Dominica. 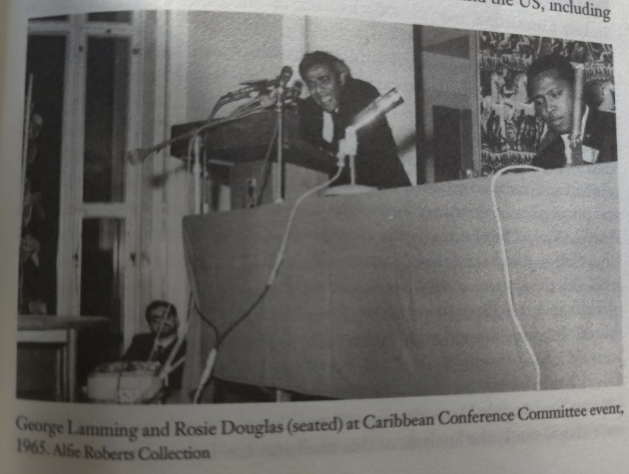 Rosie Douglas lays the basis for the Congress by his leadership in the Caribbean Conference Committee. Rosie at right with Barbadian writer George Lamming at left behind the podium (Montreal 1965) 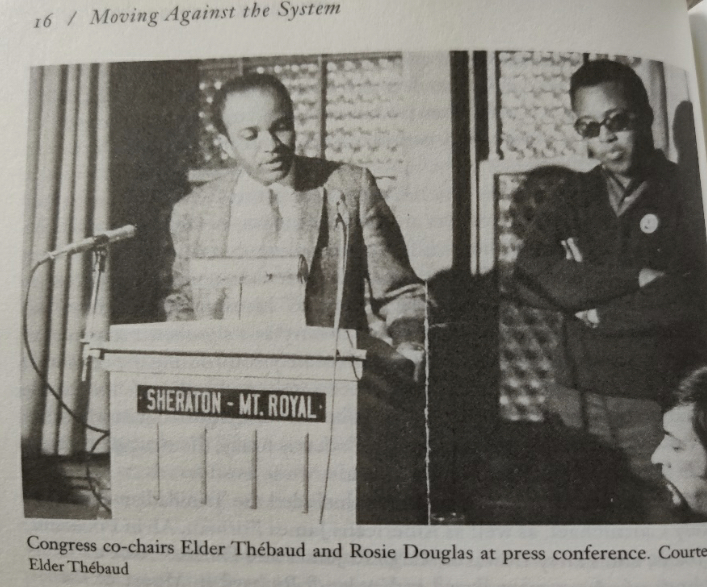 Rosie at right with Co-Chair of the Congress of Black Writers, Elder Thebaud at a Sheraton Mt. Royal press conference discussing the congress (circa October 11-14, 1968)

The entire event is captured in the outstanding book published in 2018, “Moving Against the system – The 1968 Congress of Black Writers and the Making of Global Consciousness” edited and introduced by Canadian academic David Austin. The book is a treasure trove of speeches, event photos and letters from the collection of participant Alfie Roberts and others. In the words of Dr. Harry Edwards. Professor Emeritus  of the University of California, Berkeley,

Moving Against the System is a carefully constructed montage of the leadership dynamics, and substance of what became an international movement. It is a revelatory portrait of the past that is no less revealing of the political dynamics and potential of today’s Black Lives Matter movement.

Perhaps due to his organizing ability, superior facility with the English language and leadership style, Rosie is accorded a vanguard role in organizing the congress. In a September 12, 2020  interview with Fitzgerald McClymont, a Jamaican born chemical industry businessman who studied at Montréal’s Sir George Williams University and played soccer with Rosie in the mid-1960s, “Rosie played football on defense and sometimes link back in the mid sixties on a team made up mostly of West Indians, on which I played at center forwardu. You could tell Rosie was a true leader. He was smart, tall, handsome, and imposing. His home was where students gathered to discuss ideas, party even. He was a mover and shaker. I was not surprised he rose to leadership later in life as he was already a leader when I met him. People gathered around him.”  Indeed, the book on the Congress includes a June 9, 1968 letter of invitation by Rosie to the leading Caribbean-born radical philosopher  of the 20th Century CLR James (author of the epic history of the Haitian Revolution Black Jacobins). In the letter Rosie lays out the theme of the Congress as Towards the Second Emancipation-   The Dynamics of Black Liberation.

The program proposed in Rosie’s letter included lectures on the civilizations of ancient Africa, the origins and consequences of the Black-White confrontation,  the history of slavery, the Haitian Revolution, the origins and significance of Negritude,  race relations in the USA, the fathers of the modern revolt – Garvey, Dubois etc., the economics of capitalism and perspectives for Black liberation in the future.

The Congress of Black Writers in 1968 sought to eradicate ignorance and promoted an anti-slavery mentality. The leaders and attendees were clear that the abolition of slavery did not end with the shackles being removed from our ancestors. Even more pernicious, long lasting and cruel, has been the mental conditioning or brainwashing of our people into accepting substandard leadership. By absorbing an inferiority complex, self-hatred, backwardness, incompetence, and second-class citizenship we have allowed others to lord it over us, while plundering our resources.  It is for that reason, Rosie’s letter to CLR James spoke of a second emancipation; such would necessitate first, an emancipation of the mind. Who better to accomplish that operation than the writer who teaches a new nation the requirements of self-respect, self-knowledge, and self-confidence? Without such schooling in who we are and what we can accomplish, we cannot know where we are going.

The first emancipation in the British Empire of 1834, was only partial. The enslaved sons and daughters of Africa were never compensated for the horrors and exploitation of slavery; instead, the planters were. The leadership thrown up in the post-slavery era was persecuted where it sought to create proud, educated, industrious and united Black men and women. The colonial powers only allowed leadership to rise where it could be that of a puppet on a string. Too many of our leaders have been willing accomplices to our own destruction.  Witness the efforts to destroy Marcus Garvey’s Universal Negro Improvement Association (UNIA). Observe the relentless efforts to silence the voices of Malcom X, Dr. Martin Luther King, Jr., Nelson Mandela and even Bob Marley.  The sudden and tragic death of Prime Minister Rosie Douglas on October 1, 2000 is seen in many quarters as an assassination of someone who was busy uniting Africans in the Diaspora with Africa. The message of the 1968 Congress of Black Writers must be studied by all serious students of our past so we can chart a better future.

It cannot be stressed enough that the colonial subjugation of Africa and the Americas commenced with Columbus’ expedition of 1492. Self-government for Africans at home and abroad commenced after 1945. It means that we have lived for 453 years under either a slave or colonial system of power, with all the self-loathing, self-confusion and self-hate that came with being robbed, beaten, subjugated and made a puppet on a string.  Where one considers that it is only in 1957 Ghana became independent of Britain, we have not seen Black people ruling their countries for more than 63 years, except for Ethiopia. Liberia, for most of its history, has been  literally a US colony and/or Firestone Company rubber plantation and cannot be truly considered to have had self determination. Despite the initial success of the slave revolt, Haiti itself was embargoed, invaded, and misruled by foreign imposed puppets such Papa Doc and Baby Doc Duvalier for most of its history. Considering those facts, it requires that we constantly study ways to erase the mental conditioning of slavery which favors the corrupt Massa -style leadership that has ruined the lives of many African run states, with leaders who plunder their own nations and favor foreign interests over the national interest.

The writer is essential in any societal transformation towards betterment. Rosie Douglas understood that and stated as much in his book  Change or Chains, which called for racial justice and economic empowerment of the oppressed.  No nation can rise above the values innate to that crafted by learned men and women who commit their ideas to the written word. It is by such learned activity we can take our bearings as a society.

When in 2020 Dominica’s public library, the only one in the nation,  lies in ruins three years after Hurricane Maria in 2017, we need to remind ourselves of the legacy of Rosie Douglas in the world of writing, education and eradication of the slave mentality. A national library speaks to the value a society places on the written word study and learning. What does such neglect of the national library say about Dominica as a nation in the 21st Century? That the current government in Dominica was brought into office by the co-chair of the largest Black writers’ congress in the 20th century speaks to how much they have lost their way.

It is indeed a testament to the resilience of the slave conditioning of a population, and a wish for a Massa to rule over us, that Dominica’s public library could not be repaired while the President and the Prime Minister of Dominica live in palaces costing tens of millions of dollars. May our study of the epic 1968 Congress of Black Writers mark a new birth of freedom in thought and action. In the stirring and profound words of Brother Bob Marley, let us liberate ourselves from mental slavery; only ourselves can free our minds. Let us therefore ready ourselves to move forward to the second emancipation by organizing many more such congresses of writers, artists, students, architects, farmers, industrialists, scientists, and other scholars who can craft the scaffolding of our liberty and so move us from poverty to prosperity!