In a special webinar held on 15 January 2021 and hosted by the Guardian Nigeria and CS Global Partners with the theme of “Dominica Citizenship by Investment: Redefining Wealth, Safety, and Travel for Nigerians,”the Prime Minister of Dominica, Hon. Roosevelt Skerrit, Head of Dominica Citizenship by Investment Unit (CBIU), H.E. Emmanuel Nanthan and the CEO of CS Global Partners, Micha Emmett invited wealthy Nigerians to apply for Dominican citizenship via the Citizenship by Investment (CBI) Programme. They touted the tremendous benefits of becoming a Dominican citizen and what they consider to be the tremendous benefit of the CBI program. The webinar discussed three critical benefits for Nigerians opting for economic citizenship in Dominica i.e. Wealth, Safety and Travel.

PM Skerrit advised his prospective new citizens that if they dream of succeeding in business globally and securing a bright future for their family, then the CBI Programme of Dominica is a choice to take the first step towards these accomplishments. He demonstrated how Dominican citizenship could help wealthy Nigerians in that regard, noting,

“the Commonwealth of Dominica provides many opportunities for Nigerian businesspersons to grow their businesses, whether they want to make Dominica their base or expand operations abroad. Dominica is committed to encouraging and protecting business and entrepreneurship”

Among the main benefits highlighted to Nigerians include no capital gains or estate tax, free movement of profits and dividends, preferential access to specific markets due to the Economic Partnership Agreement between CARICOM and the EUA wide range of concessions that is not limited to a particular sector. He stated that the Dominica government continues to work to assist and protect businesses to ensuring a thriving business sector.

According to PM Skerrit, a Nigerian could feel at home in Dominica as the people from both countries have similar communication modes, and Nigerians can use this opportunity to expand their horizons. He emphasized that the CBI was started to create a stable investment for Dominica and it has in fact achieved that objective.

PM Skerrit emphasized that there are substantial attendant benefits for a Nigerian citizen to become  a citizen of Dominica such as advantages of global mobility with a Dominican passport and noted that a Dominican passport holders can travel to over 140 destinations with visa-free access across the world and negotiations for visa-free access to the People’s Republic of China is ongoing. He observed that since 1993, Dominica has been inviting high net-worth individuals and their families to become citizens once investing in either a government fund or investing in pre-approved real estate properties.

According to Ambassador Nathan, the government of Dominica intends to work with Nigerians to stimulate the development and growth of both nations and Dominican citizenship gives citizens access to global business. He indicated an optimistic approach to the collaboration of both nations.

Prime Minister Skerrit has always boasted that citizenship of Dominica is always granted after conducting extensive due diligence and any allegations of corruption against any prospective purchaser is promptly captured and the record reveals that Dominica has seen a steady increase in the number of CBI applicants from Nigeria. He noted that the 2020 CBI Index of the Financial Times magazine, scored Dominica perfectly in the category of due diligence. He stated, “We are second to none. In 2021, we will be moving away from the machine-readable passports to the biometric passports, so again, further increasing the security of our passport or security of our citizenship,”

Following the webinar, it appears that PM Skerrit and Ambassador Nathan were successful in catching a significantly high level crooked political fish, who not surprisingly is also tainted with serious allegations of corruption just as the formerly appointed Trade and Investment Commissioner, Ambassador Diezani-Alison Madueke, who was allegedly granted diplomatic passport No. DP0000445 by the Dominican Government on May 21, 2015, and confirmed by approval letter of the Prime Minister of the Commonwealth of Dominica dated May 29, 2015. As reported in the Aljezeer documentary entitled, Diplomat for Sale[1], the appointment was granted shortly before the handover to the new Nigerian President Muhammadu Buhari from ex-President Goodluck Jonathan with whom she served as Minister of Petroleum.

It was reported that the consideration for the transaction was the exchange of a hurriedly purchased real estate property in New York valued in excess of US$ 2.2 million in the name of the spouse of the PM.[2] The apartment was reportedly purchased by a company registered in the American state of Delaware, which raised questions over the circumstances leading to the conferment of diplomatic status on the former Nigerian petroleum minister by the Commonwealth of Dominica.

Media reports reveal that just four days after the meeting between Mrs. Alison-Madueke and the Dominican prime minister, a shoddy and secretive company called Poros Holdings LLC was formed in Delaware, USA, on May 27, 2015. Not much detail is known about the company as the American state is known for its corporate clandestineness, making it a preferred destination of shady businesses. Curiously, the company reportedly paid for the apartment in upscale Long Island City, New York without recourse to any mortgage from a financial institution. The evidence reported showed that the spouse of the prime minister was the registered owner of the property and several photographs placed Mr. Skerrit and his family at the said property in New York on vacation.

The International Corruption Unit (ICU) of British National Crimes Agency (NCA) arrested Mrs. Alison-Madueke and four others on October 2, 2015. The UK authorities said the arrest was part of an investigation into a case of bribery and money laundering, which was started in 2013 when Mrs. Alison-Madueke was in office. (Dominicans should note that the investigations started while she was in office but the US authorities only acted years later after she left office.

In Nigeria, the anti-corruption agency, the EFCC, also filed a number of actions against the former minister, who was infamously fingered as the person behind a $20 billion slush fund investigators said was used to fund the campaign of President Goodluck Jonathan and bribe electoral officers in 2015.

In a CBS 60 Minutes program[3]on the sale of Caribbean passports, it was reported that diplomatic passports are not part of the CIB program. However, in Dominica the sale of diplomatic passports goes on under the table producing a most impressive corps of dodgy diplomats. It was reported that the Dominican government is known to grant citizenship to persons from around the world in exchange for financial contributions and investments. Reports are still unclear of how Mrs Alison-Madueke developed a relationship with the Dominican Prime Minister. However, it is common for official and unofficial agents to broker a deal for such relationships where like-minded characters are attracted to each other. The Prime Minister of Dominica is known for cozying-up with controversial persons around the world involved with corrupt dealings as fingered in a money-for-diplomatic passport racket by Al Jazeera investigation.

Following the January 2021Skerrit/Nanthan/CS Global CBI webinar targeting the Nigerian market, it was reported that Dominica moved up the success ladder by capturing the 8th wealthiest and corrupt woman of Nigeria from the 10th place candidate  and former Dominican diplomat, Diezani Alison-Madueke.

This time Skerrit was able to attract the former Senator and Minister of Aviation, Princess Stella Oduah-Ogiemwonyi of the People’s Democratic Party of Nigeria, who has a net worth of about US $600 million. Ms.Oduah has faced many charges, including the illegal import of luxurious cars, non-payment of bills for her oil & gas companies, and obtaining a fake MBA degree.

After completing her education in the United States, she returned to Nigeria and joined the Nigerian National Petroleum Corporation. She subsequently established her own company named Sea Petroleum & Gas Company Limited (SPG) which contributed to her wealth. Reports are that Ms. Stella Oduah resigned from her position due to issues arising from the procurement of vehicles in her ministry after which she acquired Dominican citizenship.

Within the Nigerian political landscape, the two wealthy, corrupt Nigerian women who allegedly possess Dominican citizenship are bitter enemies. It is alleged that former Minister of Petroleum Resources, Diezani-Alison Madueke was responsible for recommending the sacking of Ms. Oduah by former President Jonathan.  Princess Stella reportedly made the claim in a book, ‘On a Platter of Gold: How Jonathan Won and Lost Nigeria.’ According to the newest Nigerian-Dominican princess, former Senator Stella Oduah, the former president called her to explain herself after the news about the $1.6million BMW armoured cars bought for her by the Nigeria Civil Aviation Authority (NCAA) was reported.

She revealed that Alison-Madueke and former Secretary to the Government of the Federation, Anyim Pius Anyim, was present at the meeting. “I thought she had my back. I did not know at the time that she was actually fuelling it and orchestrating all the media attacks,” she told Abdullahi. I knew all along that Diezani could not deal with having another female around who had the kind of access I had to the president. But she went too far. She thought I was the one who leaked the issue of private jet that put her into trouble with the House of Representatives. For her, it was payback time. Diezani was paying people to keep the story alive. At the same time, she was whispering in [the president’s] ears that he had to take action,” Oduah stated. 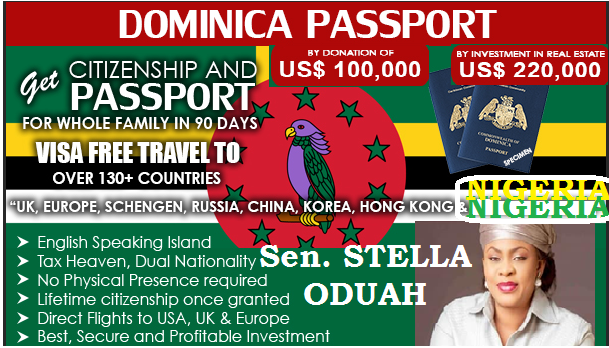 To date, the Dominican government continues to deny that Alison-Madueke was awarded a diplomatic passport in exchange for an apartment in New York. It has also not confirmed nor denied the acquisition of the Dominica citizenship by former senator and Minister Princess Stellah Oduah Ogiemwonyi